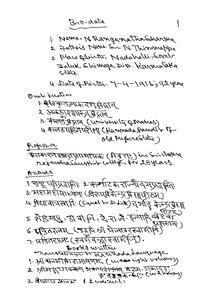 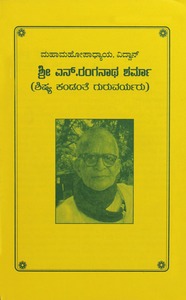 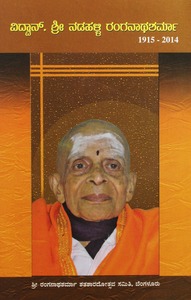 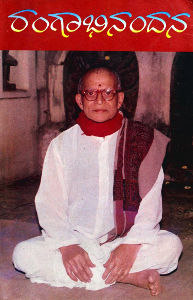 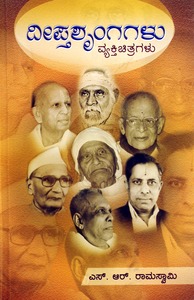 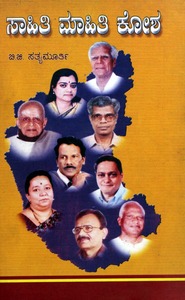 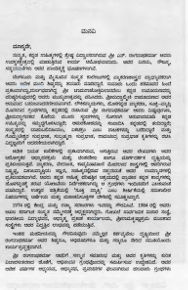 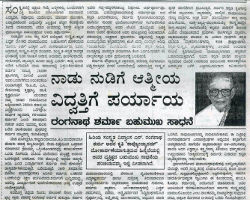 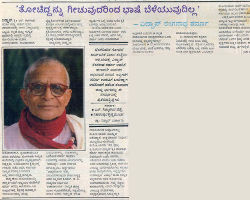 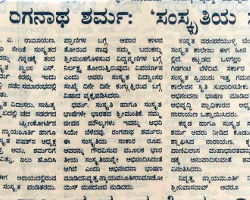 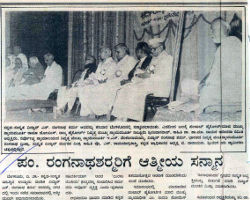 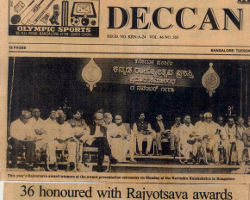 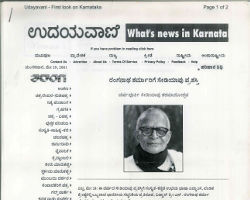 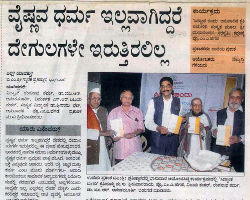 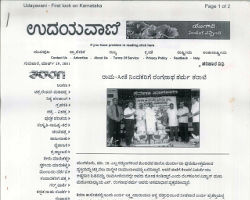 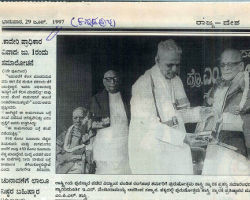 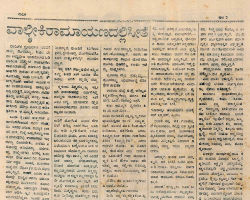 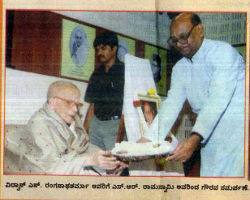 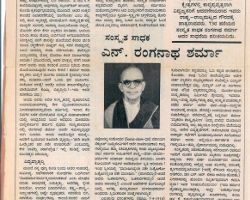 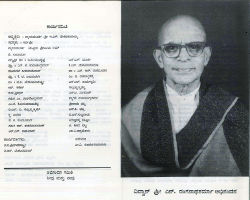 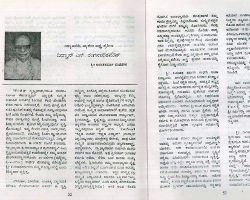 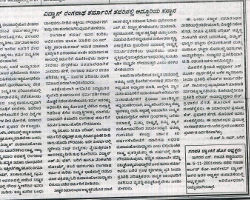 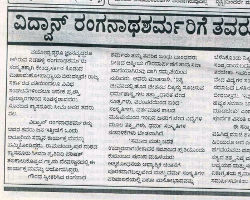 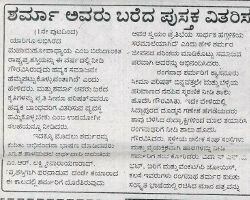 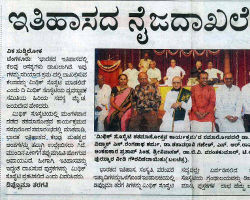 Bharata is famed as the land of punya (merit), tapas (penance) and karma (action). Innumerable intellectuals, scientists, ascetics, devout seers and scholars have taken birth here, and led fruitful lives dedicated to the welfare of the world. Venerable scholar Vid. N Ranganatha Sharma was born in this great lineage. He was a confluence of scholarship, virtues and a kind heart. He was born in the village of Nadahalli, located in the Soraba Taluk of Shimoga district, in the state of Karnataka. Sri. Sharma was born to Smt. Jaanakamma and Sri. Timmappa on 7th April 1916. That was Vaishaakha Shuddha Panchami – the auspicious day when Bhagavatpaada Shankaraachaarya incarnated on Earth. The star was Punarvasu, the birth-star of Srirama. Sri Sharma was a Yajurvedin of Vishvaamitra Gotra and Bodhaayana Sutra. He belonged to the Havyaka community of Smaarta Brahmins hailing from the lineage of disciples of Jagadguru Shankaracharya Mahasamsthanam – Srisamsthana Gokarna – Sri Ramachandrapura Matha.

Born into a family of farmers, Sri Sharma had his primary education in Nadahalli and Soraba. Then, he started his Sanskrit studies in the Agadi Anandashrama, but had to discontinue within a short time because of ill health. After that, for about three years, he studied Veda and basic Samskrita from Matturu Vedabrahma Sri Narayana Shastri, at the pathashala in the Rameshvara temple of Keladi. He passed the Prathamaa and Kaavya exams, and joined Sri Chamarajendra Samskrita Mahapathashala, Bangalore, for studying Sahitya. After completing Sahitya, he studied the advanced texts of Vyakarana under famed scholars like Vedabrahma Sri. Nuggehalli Tirunarayana Ayyangar, Vid. Timmanacharya, Vid. Srikantha Shastri and Vid. Krishna Shastri. He passed the Vidvan-madhyamaa and Vidvad-uttamaa examinations in distinction, and was awarded the degree of Vyaakarana Vidvan.

Further, he studied the texts of Alankaara Shastra under Vedabrahma Sri. Lakshminarayana Shastri and Panditapravara Koduru Krishna Jois, and passed the examination for Vidvat in Alankara Shastra. He also studied Vedanta under the same two scholars, and also learnt the advanced texts of Vedanta in depth from the great scholar and Srividya upaasaka, Vedabrahma Sri. K.P. Shankara Shastri, to become a Vedanta Vidvan. Sri Sharma was devoted to studies, and he also learnt the various modifications of the Kannada language traditionally (Halagannada, Nadugannada and Hosagannada), and passed the Kannada Vidvan examination conducted by the Madras University with distinction. He also passed the examination conducted by the Karnataka Government, to gain the title of Kannada Pandita.

Sri Sharma was the secretary of Students’ union of Sri Chamarajendra Sanskrit College for four years. He also served as the organizer of students in the Vyasamandira Student Hostel where he lived.

Sri. Sharma started his professional career as a teacher in a highschool in Hassan. He then joined the Samskrita Pathashala at Belur as a Sanskrit teacher. In 1948, he was appointed as a lecturer in the Department of Vyakarana at Sri. Chamarajendra Samskrita College in Bangalore. Having taught there for nearly 28 years, he retired in 1976. Through his career, he taught hundreds of students both within and outside the college. He was especially fond of two of his best students – Mahamahopadhyaya Vid. G Mahabaleshwar Bhat and Mahamahopadhyaya Vid. So Ti Nagaraja. He was proud of the mastery they had gained in Vyakarana through hard work. He always said that Mahabaleshwar Bhat and So Ti Nagaraja were like his two eyes. He was extremely happy that these two, having learnt the shastra from him, were in turn passing it on to deserving students, and nurturing the next generation of scholars. Delighted at seeing the family of his student-lineage growing, he enthused them with his appreciation and encouragement.

Sri. Sharma entered into the life of a householder soon after starting his career. He married Kamalakshamma in 1941. The couple had four children – Sadananda, Sharada, Jayashri and Nagabhushana. They led a contented life, but by a twist of fate, Smt. Kamalakshamma passed away in 1973 due to an illness. This was a very difficult period in his life. Sri. Sharma was thereafter both a father and a mother to his four children.

Sri. Sharma was deeply interested in writing, right from his student life. He used to participate enthusiastically in Poetry, Debate and Elocution competition. Being labelled a ‘bookform’ since childhood, Sri. Sharma utilized every moment of his professional life for learning and teaching. Participating in discourses and dramas was his hobby. His contribution to textbook committee is invaluable.

Sri. Sharma had the opportunity of translating the entire Srimad Valmiki Ramayana to Kannada, under the encouragement of Sri. DVG. This was a stroke of fortune for the people of Karnataka. Sri. Sharma served a feast of Ramakathaa to Kannadigas, translating the text in a style eminently suited to the Kannada language. Sri. Sharma was also the president of the Old Kannada Prose Translation committee of the Kannada Sahitya Parishat, and translated about 13 ancient Kannada texts to modern Kannada.

Sri. Sharma was constantly communicating his thoughts to the public through regular writings for various daily, weekly and monthly magazines. Leading an extremely fruitful life, he has contributed more than 90 texts to Sanskrit and Kannada literature, including articles, dramas, stotras, translations and much more. He took part in various scholarly meetings across the country, and was constantly engaged in the service of Goddess Sarasvati. He used to take part in assemblies of all mathas, without any distinction of caste or creed.

Sri. Ranganatha Sharma was an outstanding scholar. Hundreds of awards came to him in honour of his achievements. From an affectionate felicitation by the simple villagers of Nadahalli, to the President’s award, he has been the recipient of all kinds of honours. Several mathas, universities, public organisations and the Government have honoured themselves by conferring awards on him.

Sri. Sharma was born in Nadahalli, spent his student and professional life in Bangalore, and later, lived happily with his son Sadananda in Mysore. When he passed away on 25-01-2014, India lost a great pillar of knowledge. more...